I've been doing the weekly updates for a couple of months now and by all accounts, they've been very well-received. One of the early pieces of feedback I got though was that I should also publish them as an audio podcast so that people can listen to them in the car or while doing whatever else it is that people do while listening to syndicated content via the likes of iTunes.

Yesterday I finally got around to getting all this setup by using the OmnyStudio service, an Aussie offering which makes the process of publishing the feed and hosting the content a breeze. I then published it all to the iTunes store and there we have it - a podcast! 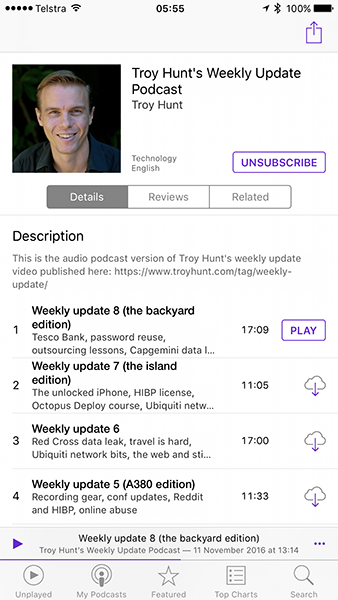 There are two ways of consuming the podcast:

It's a no-brainer for me to push and audio version of each week's video edition so I'll now maintain both of them and interested followers can pick whatever works for them. I hope this is useful for those we were requesting this feature, do keep the feedback coming if there are other suggestions.

Edit: I should have included this originally because the question was bound to be asked, but the podcast isn't in Google Play Music because they don't like Australians. Or British people. Or anyone who isn't American, apparently:

What wisdom has driven this decision is entirely beyond me, hopefully Android users can pull direct from the OmnyStudio RSS feel listed above in point 2 instead. (And don't forget to tell Google how stupid this is...)

Disqus' mixed content problem and fixing it with a CSP