Reach 20k software and security professionals a day with a troyhunt.com sponsorship

Sponsorship of troyhunt.com is available to those who wish to reach an audience of 20k global readers spending 15k minutes per day reading my content. My readers are primarily technology professionals working in software development and security disciplines across all levels of organisations. I've elected to turn to sponsorship rather than traditional ads because it's a much better experience for all involved.

The troyhunt.com reach and audience

Traffic obviously varies based on what's typical and how much attention my writing achieves, but it's typically within the order of 20k unique visitors a day as measured by Cloudflare. At peak periods of interest, it can be as high as 450k in a day. An average user spends 45 seconds on the site and views 1.2 pages.

Beyond traffic measured to the website, there's also extensive use of the RSS feed by both news readers and other services which consume from it. Further, there's an additional 11k subscribers on the Mailchimp mailing list, each receiving at least one email a week (sometimes more if they've requested daily updates) with the sponsor represented front and centre.

My writing is frequently featured in online, print, radio and television media including the world's largest publications as listed on the media page.

My demographic is spread across a global audience with the top countries being represented as follows:

Age demographics show that 72% of my audience is between 25 and 44:

Expectedly for the industry, gender is heavily biased towards males (anecdotally, women seem to be even less well represented in security than in general tech):

All demographic stats are based on Google Analytics.

Positioning of the sponsorship

Sponsorship is typically measured in weekly terms and includes the sponsor's message in a prominent yet non-obtrusive position at the top of each page: 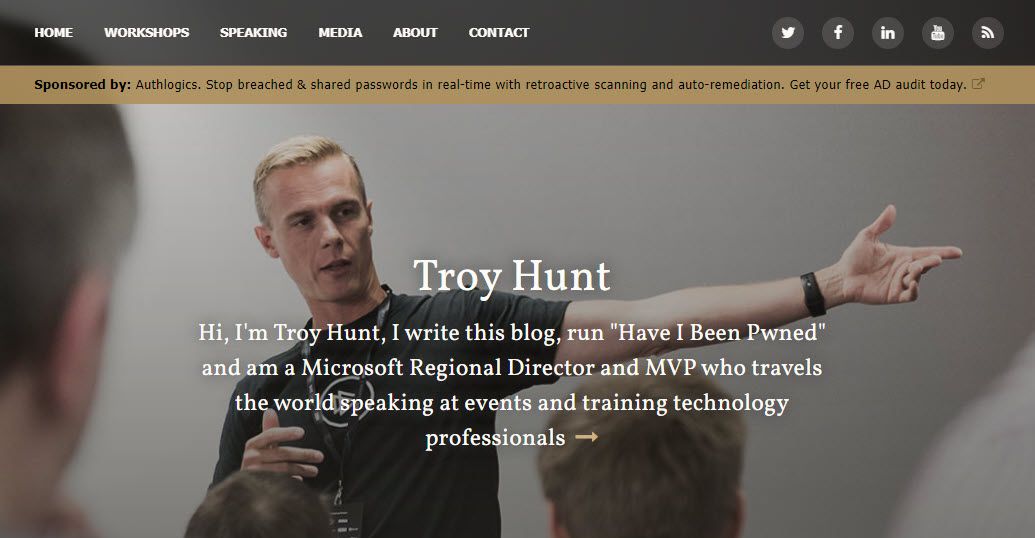 The positioning is equally prominent on the smaller screen: 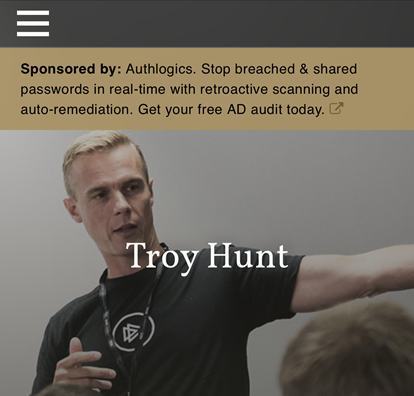 It also appears in the RSS feed which surfaces the message in both RSS readers and other consuming apps.

In addition, 11,000 technology professionals who subscribe to receive blog posts via email see the sponsorship prominently positioned next to each blog post directly in their inbox: 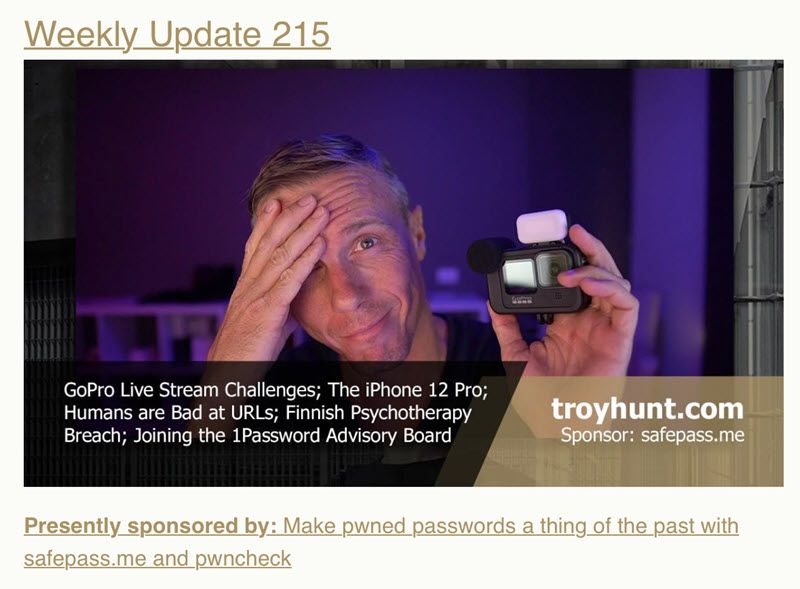 The sponsor message may be up to 140 characters long and is positioned after the "Sponsored by" text to ensure transparency. The entire message is then hyperlinked to a resource of the sponsor's choosing. It should be accurate, direct and in keeping with the candid, transparent fashion in which I run the site. The message should also clearly identify who the sponsor behind it is.

The sponsor is thanked during the week of sponsorship via both my Twitter account (200k followers) and Facebook account (8k followers). They're also mentioned in my weekly update recording which is produced as both video (with 23k YouTube subscribers) and audio, the latter produced as a podcast: 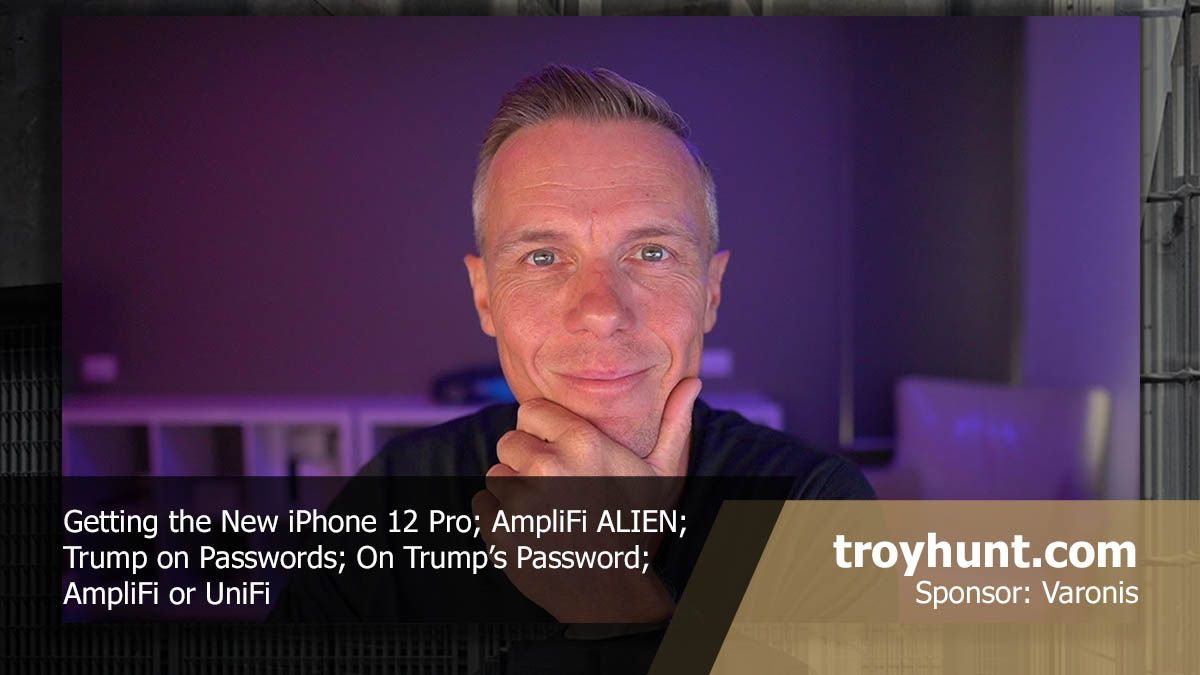 I actively engage with as much of my audience as possible and am happy to direct them to the sponsor for any queries they may have. I'm also happy to do podcasts, interviews or get involved in other promotional activities the sponsor is running over the course of the sponsorship period.

Unlike traditional ads which I had little control over, a sponsor appearing on this site is a direct relationship between them and myself. Their message appears prominently alongside my content and as a result, it's important that I'm endorsed in what the sponsor does which may mean that some are not a good fit for the site.

Pricing is POA and changes over time. Sponsorship is offered in weekly blocks and is often booked out many months in advance.

For anything that's not already covered here, please get in touch and I'll be happy to answer any questions.

How do I get in touch?

Reach out via my contact page, preferably via the email address there.

Can I add a third party tracker?

One of the goals of sponsorship was to move away from trackers which much of my audience eschews for privacy reasons.

I don't track either in part because they're spread across a variety of different mediums (blog, podcast, YouTube, social media) and in part because focusing on these metrics is not what the sponsorship model is intended to be about. I do, however, encourage sponsors to track clicks on the destination resource.

Can I sponsor individual posts or target specific demographics?

Sponsorship covers every page on troyhunt.com and is served to every visitor regardless of their demographic.

Can I add markup to the sponsor message?

Italics is fine, anything else is a discussion to be had around aesthetic continuity and not appearing spammy.

Can I use marquee or blink tags?