For the first time in about as long as I can remember, I’m at a conference and not actually presenting anything. It’s enormously liberating actually and it’s allowed me to soak up a heap of info without being preoccupied with actually, well, doing stuff. Mind you, I’m chairing half a dozen sessions at AusCERT 2015 but that amounts to introducing someone, sitting back to enjoy their talk then thanking them very much.

Anyway, all this sitting around and watching other people talk about technology really got me thinking about speaking style. I work enormously hard on refining my own style and a huge amount of how I present today is influenced by what I observe from other speakers, both the good and the bad.

As I watched the presentations these last few days and reflected on those I’ve seen just in the last couple of weeks during my European travels, I realised that many of the talks demonstrated common speaking anti-patterns that I see all over the world in different talks. What’s more, at one time or another I have demonstrated every single one of them myself in my own talks. I know this because I watch them all again (at least once) and tear them apart.

So here are the anti-patterns I see and more importantly, what I reckon you need to do to avoid them. Speaking can be enormously empowering and continuous improvement is a very fulfilling thing, but it only happens by being a bit introspective and looking for your own areas of improvement. 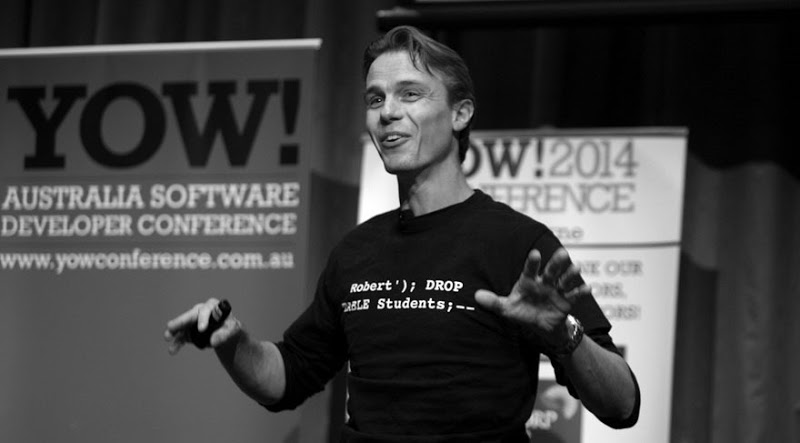 Stands behind the lectern and… reads. The lectern becomes the “safe space” behind which are copious notes in presenter view which can be read to the audience thus ensuring no faux pas occurs in terms of missing a key point. Attention appears to be on their PC rather than on their audience and a vital connection is lost.

The solution (and you’re going to see this coming up a bit) is rehearsal. Lots of rehearsal. I’ll do every talk many times before delivering it publicly, probably a dozen times all up and at least three or four times out loud at normal pace including the night before and the morning of. IMHO, you simply cannot read from notes and appear fluid and connected at the same time.

Builds content that looks awesome… when they’re sitting right in front of their 32” screen preparing it. The people at the back of the room in their talk, however, are left wondering. Same deal again with presenting demos and the fonts are too small. The audience are left squinting and wondering as the presenter proceeds, often none the wiser.

Clearly, stuff just needs to be bigger. For static content in slides you need to get this right at design time such that everything looks massive in front of you when you’re at your desk. You usually don’t know how big the screen will be nor how long the room is and the only safe assumption is to err on the side of caution. Obviously also pump up font sizes in editors or browser windows and make liberal use of ZoomIt.

A close relative of the The Reader, the statue is glued in place, ignoring the stage space either side of them. By not moving around, they miss the opportunity to engage with different segments of the audience as they’re stuck in that one position, often just looking dead ahead.

Motion and gestures carry enormous gravitas and emphasise the content being presented in a very nuanced way. The position on the stage can also reinforce the messaging – you might always return to the one spot when telling a story, or lean casually on the lectern when reflecting. Body language is enormously important and The Statue misses this entirely.

Is enormously sorry for failed demos / slow internet / etc etc. It’s their fault, they screwed up and your kind forgiveness would be very much appreciated. If they apologise enough times, the audience will absolve them (or their equipment) of their sins and everything will be cool, right?

This is something that just doesn’t resonate with the audience beyond them feeling sorry for the speaker. What impresses an audience is when the speaker recovers from adversity. This comes back to preparation again – what’s your backup when a demo fails? When the internet connection drops? When the projector won’t work (I’ve seen it happen and the presenter had to wing it all verbally)? You don’t make excuses, you get on it with it and relish the opportunity to show how you can think on your feet.

Is enormously entertaining but you leave the session having learned nothing of much actual value. Memes can be cool, animations can add impact and jokes can build rapport with the audience. But the risk the humourist faces is that those who’ve come to learn walk away with nothing that is actually of any practical value whatsoever.

This is about knowing your audience and understanding what it is that they expect to learn from you. Different sessions require a different approach; if I do a keynote then I’m going to paint a much broader picture of the industry as everyone is grouped into that one session. If I do a technical session then I’m going to show things and make sure they’re things people can take away and use. I’ll always apply humour, but it will always be backed up by substance.

Another close relative of The Reader, the Bullet-Pointer festoons their presentations with numerous bullet points which they will then proceed to verbally relay to the audience. More advanced practitioners may highlight said bullets with bevel and / or drop shadow effects.

Reading from slides is one of the top no-nos of doing any form of presentation, with only a few notable exceptions. Less is almost certainly more in these situations – the audience is there (or at least should be there) to see you, not a carbon-based text to speech machine.

Is not conscious that the clock time is running faster than their brain time and is about 50% of the way through their talk when they hit 95% of their allocated time. They compensate by talking faster, cutting slides, keeping the audience late (and possibly missing their next talk) or simply not finishing at all. The whole premise of a beginning, middle and end in a talk goes out the window and the audience is left hanging.

Preparation. Is there an echo in here? But seriously, you’ve got to rehearse these things like crazy and also recognise that your pace changes between private rehearsals and public presentations. On that point, I always have a timing sheet in large letters next to my iPad with a timer in an easily glanceable location:

This is invaluable. I refine the timing on subsequent rehearsal and ensure it’s accurate to the minute with two or three minutes to spare at the end just in case I start late or have an issue. I glance at it very few minutes and either slow down the pace (usually by embellishing on a topic) or speed it up to get back on track. But here’s the key – this has to be something you can check with a glance otherwise you become this next one…

Ever go to dinner with someone and they’re continually looking at their watch? How did that make you feel – valued? Or were you keeping them from something more important than you? The Preoccupied is closely related to The Time Traveller but they’re caught up in looking at their wrist which is a clearly observable behaviour that the audience will pick up on.

This is pretty much the same solution as with The Time Traveller: rehearse and keep a timing sheet handy that you can sneak regular peeks at. Unless you’re doing a talk on watches, don’t keep looking at your watch!

You’ll recognise this one by the lack of emphasis, excitement, sadness, surprise and any other emotion that expresses the ups and downs of their personality. It’s easy for this style just to become a drone as the talk becomes one long stream of words and no matter how exciting the subject is, the speaker ends up being boring as they struggle to engage the audience.

Emotion is extremely important in all our communication and when you’re up there trying to command attention (and make no mistake, when you’re the one up there you should be the centre of attention), The Monotone speaker is at real risk of losing them. One of the big problems with this speaker is that there’s almost certainly a lack of humour and interaction, both of which limits the audience from getting involved in the talk.

Skype messages are important. Twitter notifications are important. Evernote syncing is important. And none of them should be on the big screen! Have any of these that appear in response to an external individual performing an action such as a Twitter mention and they will do it during your talk because frankly, it can be highly amusing to be able to see your own name up in lights. Sometimes people can get quite creative when they can control what appears on the presenter’s screen, but I digress.

We all have a heap of background stuff running on our machines the whole time and a lot of it loves to let you know when stuff is happening. Kill it – kill it all! I actually have a list of things I need to make sure I kill before I talk, in fact I have a big list of things I need to do when I’m setting up. For example, this was from DevSum in Stockholm last week:

I go through all of this after I have everything setup and check it all off. Some of these are little things, but they’re key to making the whole show run smoothly.

Go forth and speak!

These ten behaviours undoubtedly limit the speaker’s ability to perform meaningful, engaging and memorable talks. But they’re still talking – they’re up there putting their views forth and contributing in a way that most people don’t. Frankly, that’s the biggest hurdle to overcome and they all deserve kudos for being up there in the first place. From there on it’s just continual refinement regardless of how long you’ve been doing it or how slick your style is.

Just for reference, a couple of examples of presentation styles that really resonate with the audience. Scott Hanselman always nails it, check out his talk from Codemania in Auckland last year. Mikko Hypponen is another standout, his TED talk on the NSA is a great example. When you watch their various talks, there’s a number of things that frequently stand out: they’re relaxed, they move around a lot, they engage with the audience, they use humour and they leave lasting memories of what they’ve presented. The content is great, but they also deliver it in an impactful fashion. There’s your challenge folks, tying all these things together.

Now you can monitor “Have I been pwned?” performance on Azure in real time

It’s time for A grade SSL on Azure websites