So I’m working with someone on a bit of Azure magic the other day and I’m talking them through how to use the management portal. Well at least I was trying to talk them through it but they weren’t seeing what I was seeing on the other end of the phone. It went a bit like this:

Me: Ok, so just click on “All items”, it’s got that little symbol with all the squares next to it.

Them: It looks like the site is not compatible with IE 8.

Me: Hmmm, was before, is there something in particular that’s not working?

Them: It actually says the entire thing is not compatible with IE 8, let me send you a screen grab: 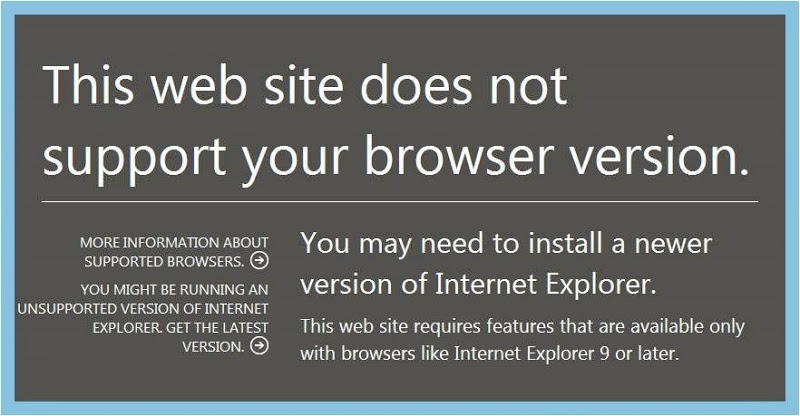 Yes! Yes, yes, yes! You see I’m a bit elated because this is precisely what I prophesised some time back when I wrote about The impending crisis that is Windows XP and IE 8. At the time, I said this:

IE 8 support will literally drop off the edge of the cliff and it will happen very, very suddenly

The only real debate around this ended up being whether I meant “literally” or “figuratively” – that support for the old guy would end quickly was never really up for discussion and indeed, here we are.

Now as much as I love Azure, there’s more to the web than just their management portal and indeed Microsoft pulling the pin on their own elder-statesman browser is hardly evidence of support dropping off the cliff.

Anyway, I then needed the aforementioned individual to review a commit on GitHub so I send them over the link:

Me: Take a look at this commit – is this the one you’re talking about?

Me: You mean that’s not the commit you made?

Them: Actually, it doesn’t look like GitHub works with IE 8 anymore.

As it turns out, yes, seriously, IE 8 is now no longer supported by GitHub: 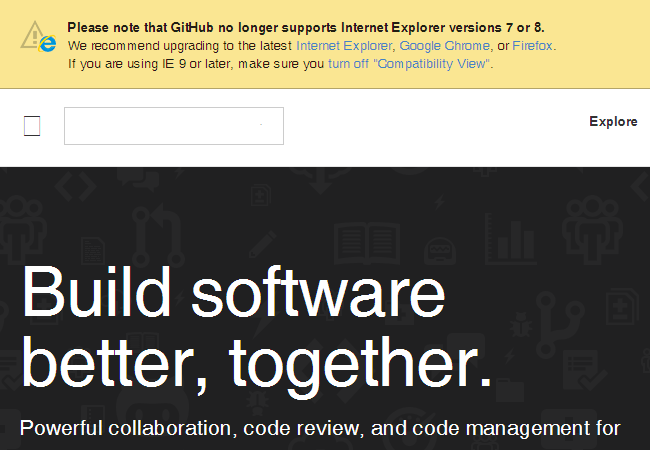 Now I’m not making any of this up – for reasons beyond their control, the folks I was working with were constrained to IE 8 which means things simply stopped working. This isn’t “graceful degradation” or “hey, why do the round corners look square in that browser” this is full on blockage from getting through the front door.

It made me a little curious – is this my foretold prophecy coming true? Are there other sites that are now actively blocking IE 8? I asked around and one that came up over and over was Trello: 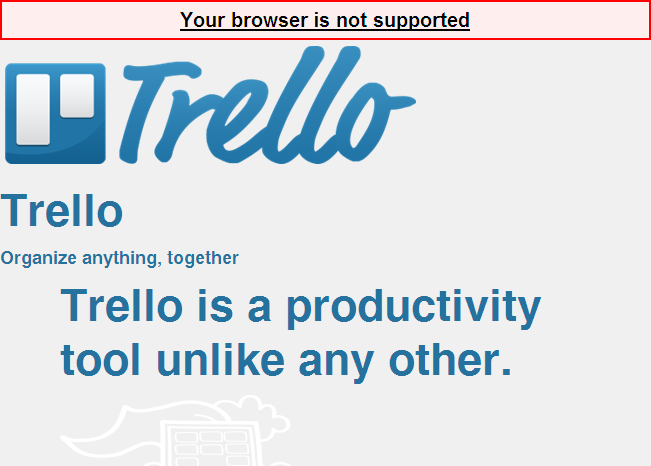 In fact Trello didn’t just drop support for IE 8, they nuked IE 9 as well. The other poignant thing to point out here is that the Azure Management Portal and GitHub are tools for IT folks who you’d expect to be more tech savvy and up to speed with the state of modern browsers. But Trello is way more mainstream and touches a much broader range of users.

Reckon Trello is still a bit niche and probably not relevant enough to the broader audience? Then check this out: 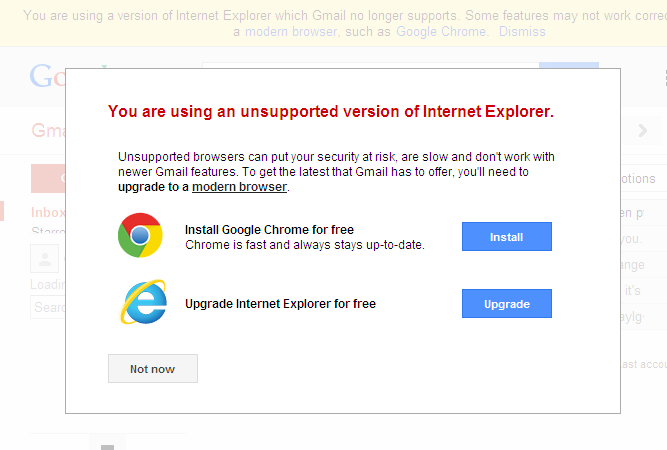 That’s right, Gmail has also killed off IE 8 support. Now we’re talking! Google has somewhere in the order of half a billion people using Gmail these days and none of them are welcome any longer if they’re using IE 8. That’s a very significant, very bold step for them to take and if that doesn’t signal a rapid decline in IE 8 prevalence, I don’t know what does. 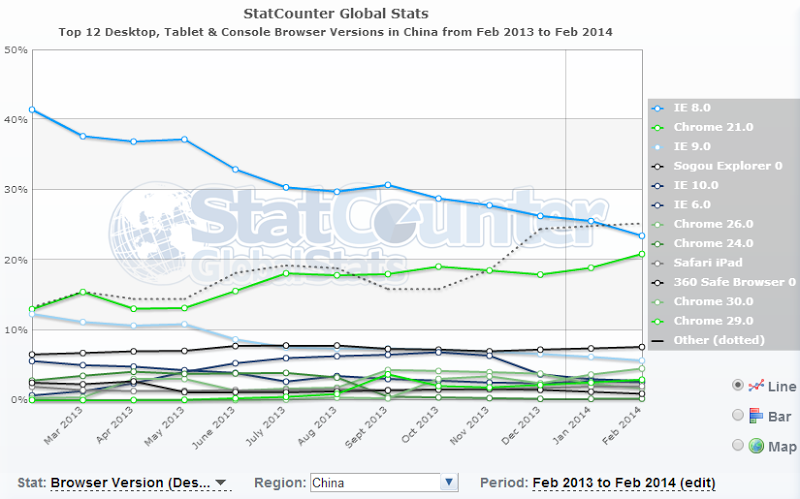 Huh? What?! If you live in the world’s most populous country and more importantly, the country with the most internet users – more than the next three largest countries combined – you’re more likely to be using IE 8 than anything else. Conversely, if you want the world’s most internet-dense population to use your site, it still needs to support IE 8. Why is it so? I haven’t seen anything to suggest that my original hypothesis on the prevalence of piracy in China doesn’t still hold true and this could well be keeping IE 8 alive there due to the piracy rates of Windows XP.

On the other hand, China is obviously showing a strong trend towards Chrome and that’ll surpass IE 8 very soon on its current trajectory. That support for IE 8 is being dropped so quickly can only accelerate the trend, even when China tends to be its own little microcosm (ok, big microcosm), of sites and services.

Take China out of the picture and IE 8 is rapidly fading into obscurity. Down here in Aus it has 4.5%, over in the US they’re a little higher at 6.2% and over to Europe and the UK is all the way down with us at only 4.5% again. The world’s third most populous internet community – India – is at 4.9% and next after that is Japan running a relatively high 7%. All of these are rapidly trending downwards.

Consider organisations and developers building new apps today or even enhancing existing ones; faced with small single digit percentage uptakes of IE 8 (China aside), and all markets showing a rapid decline (including China), why would you even bother? I mean what’s the value proposition in bulking up the app with all that extra guff required for backward capability, loading up the technical debt with all the extra shims and conditions and pre-HTML 5 do-dads then paying to pump it all down the wire while the end user gets a slower experience from it all? For what? A few more months stay of execution of the old browser?

This brings me back to the point about the prophesised crisis: IE 8 support is now on a very rapid decline that will only accelerate. If you’re using IE 8, it’s time to either upgrade it or pick another browser. On Windows XP and can’t upgrade past IE 8? Well you’ve got 2 weeks until support for that is gone and you’re left exposed the next time a vulnerability is discovered. Now if I was an attacker with some juicy XP vulns, I’d be waiting until juuuust after April 8…

It was good for a while there folks, but it’s time for XP and IE 8 to be put to pasture.

What price might you really be paying for Woolworths “free” wifi?