I had an opportunity recently, an opportunity to give a really impactful demonstration of Windows Azure to people who had not yet drunk from the Microsoft cloud fountain of love. These were people from the “old world” where men were men and infrastructure wasn’t a service, it was cold, hard metal that cost a ton and stuck with you until the damn thing was puffing out smoke.

But these were also people that were attracted to the promise of the “new world”; the on-demand, auto-scaling, commoditised, we-can’t-quite-solve-world-hunger-yet-but-we’ll-give-it-a-damn-good-go promise that’s in all the PowerPoint slides they see. Now I’ve seen some very good PPT decks before, but nothing speaks to people like a working product.

There are a lot of magnificent features in Azure and all sorts of services that can pull off some pretty impressive stunts that get the geek-brigade wetting their pants with excitement, but the people you need to really convince of the awesome are rarely the ones marvelling at the process isolation of the idempotent polymorphic shape-shifter widgets (I hope the sentiment is conveyed by the ludicracy of this statement). No, the people who need convincing are the ones who want to know things like how much sooner it allows them to deliver working software to their customers, what options it will give them to cut costs and importantly in the context of this demo, they want a good high-level view of how the damn thing actually works. This is the “pitch” of this demo – those are the guys I’m trying to reach.

I set a lofty goal for this – “The world’s greatest Azure demo” – and in the context of what I’ve just described about the target demographic, I reckon it’s come out pretty good. Set a high goal then jump like mad. 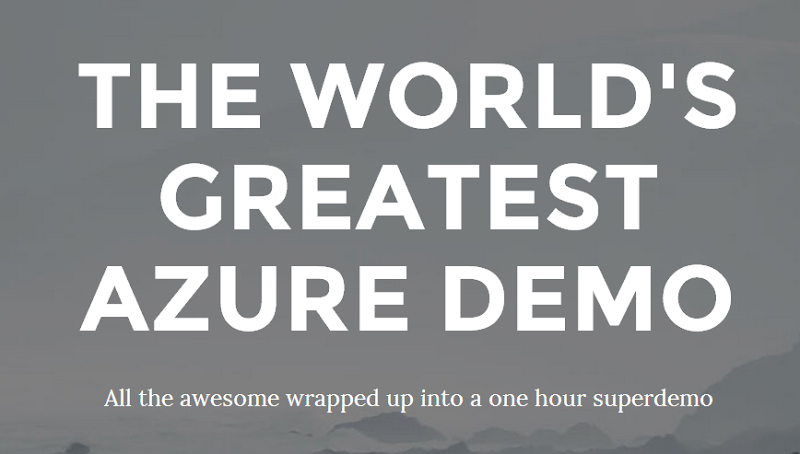 I’m going to cover 14 discrete topics all stitched up into one superdemo. The plan was to take about an hour per the title in the website you see above (this is a real live website I setup in the demo and push out to worldsgreatestazuredemo.com by the way), but I got, uh, a bit carried away. Only by another 22 minutes, but sometimes there’s just a story that wants to get out and it’s hard to hold it in.

Here’s where all the effort goes:

Note: I misquoted a couple of things when talking about availability, see this comment below for clarification.

Windows Azure Friday: It's a Friday, it's Hanselman, it's more Azure goodness to wrap up each week with

Pluralsight: Hardcore developer and IT video training by the pros with heaps of Azure material

Azure Support Forum: Learn by reading the challenges others are facing — no really, read these, you'll learn heaps

Scott Gu's blog: It's all Azure lately and it's all good — get the good word on what's new from the man himself

I put my Azure website in the wrong location, now what?!

Donations, why I don’t need them and why I’m now accepting them for “Have I been pwned?”