A few months back I got a call one evening which was clearly a virus call centre scam; you know, the ones that call you out of the blue, tell you your PC is infected with all sorts of nasties and offer to fix it for you? Or maybe you don’t know, which of course is why these scams have been going on for quite some time and are still very active today.

Fortunately I did know about such things so rather than summarily dismissing them with a level of disdain I normally reserve only for telemarketers, I recorded the audio of the call right up until the point where they were ready to take control of my PC. I published the whole episode in my post titled Anatomy of a virus call centre scam.

But I was left wondering; what exactly were they going to do to my PC once they got remote control? Try and squeeze some cash out of me for “fixing” things? Install their own variant of “antivirus”? Or just plain old enslave my PC into being part of a botnet? So I decided to find out by letting them do whatever they wanted whilst recording the audio and the screen so the entire experience could be shared.

For this exercise I created a brand spanking new Windows 7 trial install on a spare hard disk and physically disconnected every other disk from the machine. I then unplugged every other device from the router and disabled wifi. I now had a totally isolated, disposable machine with nothing more than an internet connection.

I installed enough of the basics on the machine to make it look legitimate (Office, Acrobat Reader, Skype, etc.) and also installed Microsoft Security Essentials. I then ran Windows Update repeatedly until every single service pack, patch and even language pack was installed. The machine was as up to date and as secure as it could be without going to third party products.

I then added various items to the desktop which might appear a bit tempting such as “Passwords.txt” and “2011 Finances.xls”. I wasn’t expecting them to be accessed, but it helped the machine appear more legitimate.

I’d asked around about other people having received scam calls and was given a phone number in the UK (01916451644) and one in Australia (0872001644), both having previously been left by the scammers. A quick Google on either of these numbers will give you numerous results with people complaining about being cold-called by scammers. Both of these numbers also appear on Comantra’s website.

So who is Comantra? They’re an Indian firm specialising in remote computer support which, on the surface of it, is a perfectly legitimate business. Problem is, they’ve got a long history of scamming people and had their Gold partner status revoked by Microsoft back in September last year as a result. 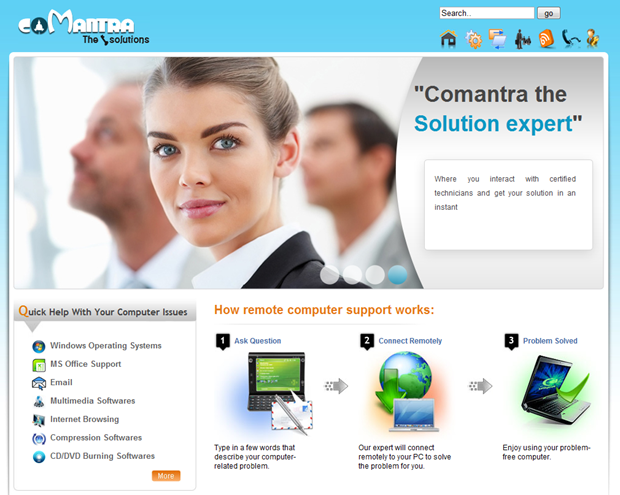 I started Camtasia running on the machine capturing both screen and microphone then gave them a call. After a couple of false starts, I ended up acquiring a pre-paid SIM card for my phone as each time I called they absolutely insisted on calling me back before doing anything nasty and I wasn’t about to hand out my personal details. Finally, on Saturday a few days ago, I got through to them.

Here’s what happened next:

Let give you the abridged version here in case you (quite rightly) didn’t feel like sitting through the entire thing:

The whole process was a completely disjointed, muddled experience involving jumping around between a number of legitimate services which were used to create fear, uncertainty and doubt. Even the Comantra processes of registration then payment don’t actually appear to be related which makes you wonder if there’s any service provided at all after handing over cash.

One thing that was a little interesting was the use of two different remote control products; Ammyy then LogMeIn. My best guess at the rationale behind this is that Ammyy is used first because it’s an entirely free service which doesn’t require them to divulge any sort of subscription key. However it also doesn’t give them persistent remote control beyond that initial session so I suspect it’s used to validate that the “mark” is willing to go along with the scam before divulging something of value to them – the LogMeIn PIN.

Now, I want to be absolutely crystal clear that this is a scam from the outset. The end of the call descends into the operator vehemently defending the legitimacy of the Comantra service so I’m going to specifically quote a number of the things he said during the call. Also keep in mind the pretence with which these calls are initiated; this is a “cold-call” – one made without opting-in on the premise that they have been alerted to malicious activity on your PC. This is clearly a lie.

Here are some of the more significant quotes from throughout the encounter:

Despite the operator protesting to the contrary, this is an outright scam in every sense of the word. The Australian government has this on their Scam Watch website, it’s widely reported in the UK press and it’s rampant in the US as well. I very much doubt these three countries are the only targets too; they’re simply the ones I’ve had reports from when I asked about other people experiencing the same thing.

The modus operandi is a familiar one; load the Event Viewer to demonstrate all the “problems”, get remote control and install third party software then charge the customer for the service. I knew better than to get caught the first time, as would most of you reading this on a technology blog.

But it’s not always that way; innocent people who are not tech-savvy enough to recognise the scam are frequently being caught and it’s often the people who can least afford to part with the cash. The scam centres around finding victims who are vulnerable and easily exploited for the benefit or crooks on the other side of the world.

I was a little tongue-in-cheek in the video but this really is a serious matter. Now that this has been posted I’m contacting each and every innocent party involved in the scam (Ammyy, LogMeIn, iObit and obviously Microsoft) and submitting it to the Australian Scam Watch site and AusCERT. I’ll update this post with any responses of interest I can share.

So what can you do? Talk to those around you who may fall victim to this scam, share this post, make them aware of the risks and above all, hang up on crooks who call out of the blue in the hope of parting you from your hard-earned cash.

Update 1 (09:30): Within hours of publishing this post, I have contacted each of the following and provided details of their role in the scam. I’ve also asked each if they’re willing to provide any feedback that I can share here:

I’ve also submitted it to:

Update 2 (21:00): AusCERT responded within hours of my contacting them and issued an alert on their website. They also put out an advisory on the Australian Government’s Stay Smart Online website. Big kudos to them for acting so promptly.

Ammyy has also responded with the following:

Thank you for contacting us. You are right, all we can do is to post warning on our main page.

Somebody also pointed out to me that during the video, you can actually see text on the Ammyy website which says “Got phone call and asked to launch Ammyy Admin? Important info on malicious use.” and links to a warning page. Is this enough? I certainly didn’t see it during the call and you could argue that Ammyy could do more to verify legitimate use (email verification, for example), but of course this also increases the barrier to use. Of course you could also argue that there is no incentive for Ammyy to prevent these sort of scams so I’m not expecting anything to change on that front any time soon.

Update 3 (Feb 22): I’ve had a response from LogMeIn with the important bit relating to this video being as follows:

Use of our software for nefarious or illegal purposes violates our terms and is immediate grounds for account termination -- it is something we take very seriously. The code you provided can be used as a fingerprint to immediately ID the account. And it was forwarded to our team to investigate and shutdown, as soon as we received it last night.

Hopefully that means life has just been made a little bit harder on Comantra, but then again, they’ve been running the same scam over and over again using the same Ammyy and LogMeIn software so clearly having one account terminated is nothing more than a small hurdle to them. The response form LogMeIn continues:

A major safety and security feature of an on-demand support solution like is that it requires mutual consent: No action can be taken by a support technician without a computer owner granting access.

The problem, of course, is that Comantra are socially engineering people into consenting to what amounts to little more than a software install. Certainly there are no big warning signs put up by LogMeIn. I totally understand this from LogMeIn’s perspective (barrier to use and all that), but the fact remains that scammers are able to repeatedly abuse their service times and again and have done so for a long period of time.

Update (March 28): As pointed out in the comments below, Comantra has ceased "further inputs into novel registrations". The grammatically challenged entry on their site effectively states that due to "some fellow critics in the industry", they will no longer be making unsolicited approaches to consumers. There is no mention of whether they will continue to screw existing customers.