Let’s just get this out of the way early – Azure is awesome. No really, I am continually blown away by the stuff you can do with it, how cheaply you can do it and just how much it changes the conversation you can have with those you’re delivering solution to using Microsoft’s cloud. This is not an endorsement based on my affinity for Microsoft nor is it constructed from what I read or see at talks, it’s based on my own firsthand experiences delivering real world software on the platform.

I’ve been writing a lot about Azure over the last 18 months as I’ve built out Have I been pwned? (HIBP). This has been an excellent test case for Azure (indeed that’s one of the reasons I built the service in the first place) and it’s demonstrated a number of cloud attributes that Azure does so well. For example, I’ve had to deal with very rapid scale changes that go from almost zero traffic to 12,000 visitors in just over an hour. That’s just organic traffic too – people with browsers – sometimes it gets properly busy and I see 8,000 requests per minute courtesy of just one consumer hammering the API. Another example of cloud-like behaviour is the ability to deliver on a budget – I don’t make anything beyond donations out of this thing so I run it on an absolute shoestring and still support the scale when there are many millions of hits in a day.

But there’s a lot of work I’ve been doing with Azure behind the scenes too, work I don’t always get to talk about publicly. What I will say though is that there have been some great opportunities to really transform the way software runs on the web not just by moving it into Azure but specifically by using Azure’s Platform as a Service (PaaS) facilities, namely web sites (which changed to web apps before I finished creating the course, thanks for that guys…) and the Azure SQL database service. This has led to some really serious cost savings (did you know you can put as many sites as you like on one basic or standard website service?) and massive reductions in management and people overhead.

In fact I reckon Azure is so awesome, I made a course on it – a proper course:

I say “proper” because this isn’t my first foray into Azure training. Last year I created The World’s Greatest Azure Demo. Now I admit, that’s a rather lofty goal, but it has been enormously well received both by Microsoft and the community in general. In fact after I created it, I had a moment of regret – “Oh man, this is actually really good, I probably should have just done it as a Pluralsight course”. As it turns out, I’m glad I didn’t because nothing has reach like a free YouTube video! It made Azure really easily accessible to a very broad audience and the feedback has been absolutely sensational:

It goes on and of course it’s enormously fulfilling to see such glowing feedback on something you pour a lot of effort into, particularly when you put it out there for free. This remains one of the best ways to quickly get a really broad overview of the Azure value proposition and if that’s what you’re looking for then the YouTube vid is the best place to start.

Spurred on by this feedback, last year I decided to write a Pluralsight course on Azure. Now that’s a very different approach to just hitting “record” and talking for an hour and a half. How so? Well for one thing, there’ an awful lot of planning that goes into it: 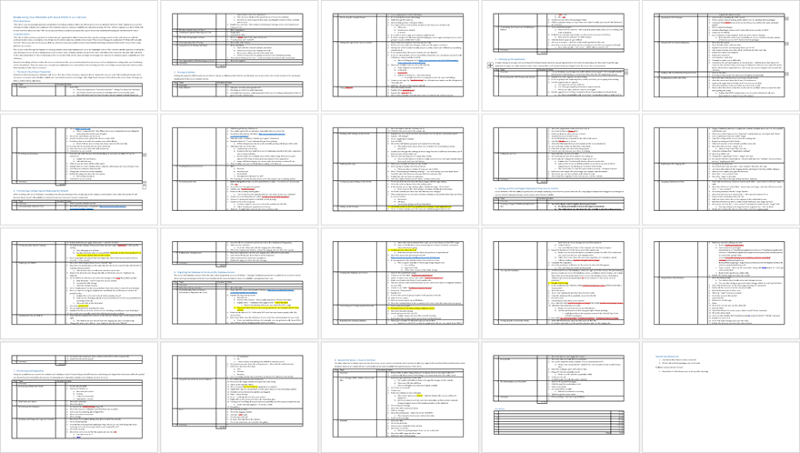 That’s 5,600 words over 20 pages of pretty much just bullet points. This is what I prepare before recording a course and it outlines all the major things I need to touch on across the modules. For this course, those modules include:

That’s five and a half hours of content there and as you can see, it goes well beyond just Azure itself albeit with the entire thing focusing on those PaaS offerings for websites and databases. Much of the context is about making the transition from traditional approaches to website hosting to the Azure PaaS model. GitHub, for example, features in the course because now it’s easy to automate deployment from there. I “clean up” the app to make proper use of NuGet, remove local dependencies and apply a few tricks to reduce the cost of running it in a cloud environment. The course recognises that for many people, moving to Azure is not a greenfield proposition rather it’s about adapting what they have to play nice in the cloud.

One area where this course really differs from the free YouTube one is that everything is based around the new Azure portal. There’s a heap of stuff you can only do in the new portal and not the old one, for example, fine-grained control over auto-scale thresholds and testing in production for websites or point in time restore for the database. In fact very conveniently, just before I recorded the module on automating the deployment from GitHub, the new portal added support for this and saved me having to resort to the old one. I’m enormously pleased about this as it means 100% of content is in the new version.

In writing this course, I wanted to ensure it was a real “from the trenches” experience – this is exactly the approach I’ve taken with dozens of sites – it’s not hypothetical and of course there’s pretty well documented paper trail of what I’ve been doing with Azure on this blog! It’s designed for those who want to make the transition to Microsoft’s cloud but may be a bit tentative;

Will my existing stuff actually run? Most of the time, yes, with a few gotchas.

Will it suddenly cost me a heap of money if my traffic goes up? You mean will you pay more if you become wildly successful? Yes, but you monitor that and alerted when it begins to happen.

How do even see what’s going on when I can’t remote into the machine? With awesome monitoring such as you get for free from New Relic: 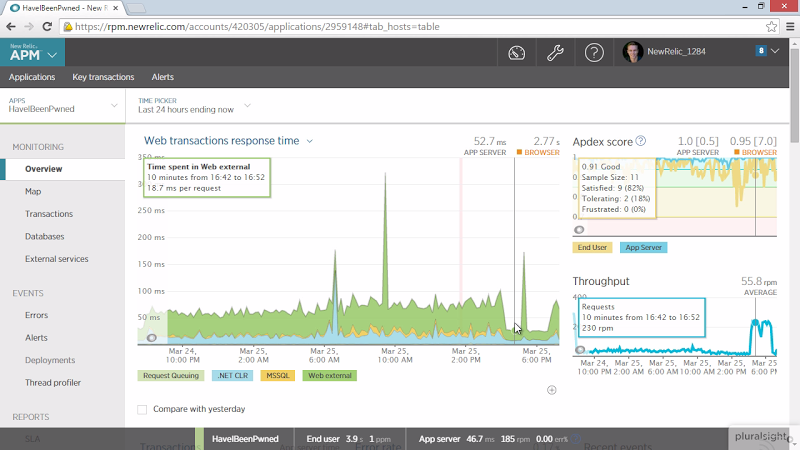 I cover all this and a heap more in the course.

I really hope you enjoy this course, I’ve poured in everything I think you need to know about moving your things to Azure websites and databases as a service and it’s now available on Pluralsight under Modernizing Your Websites with Azure Platform as a Service. Enjoy!

Fail fast when the cloud fails you