I GOT A LOT OF PROBLEMS WITH YOU PEOPLE! Now, you’re gonna hear about ‘em. 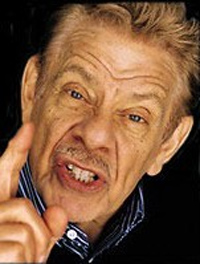 Let’s begin the tradition of Festivus with the airing of grievances, in particular, corporate meeting etiquette gone bad. Love ‘em or hate ‘em, meetings are a part of everyday life for many of us. However, some people just seem hell-bent on making them miserable for everyone.

To be fair, I suspect the full impact of seemingly innocuous behaviour isn’t always evident to the perpetrators. Let’s face it, we all like different degrees of formality and structure in our lives and we all react differently when it goes out the window.

The thing is though, it’s really not hard to avoid making life difficult on others, there’s only a few things you need to get right and they’re all pretty simple. LET THE GRIEVANCES BEGIN!

Look, we’re all busy, I get that, but the whole idea of having a centralised scheduling system like Exchange is so that when you’re busy, you put the damn meeting in your calendar! There’s nothing more disheartening than finding that perfect sweet spot of free time for every participant only to be told “Sorry, I’m actually busy”. It not only inconveniences the chairperson, it inconveniences every other participant who has accepted the meeting and planned their busy schedules around the commitment.

Grievance 2: Block out your public holidays, we don’t all live in your world

Particularly relevant for groups of people spread out across the globe, for all intents and purposes, public holidays are no different to any other day off during the week. Yes, I appreciate that Thanksgiving|Diwali|Bastille Day is important to you and yes, I understand that everyone in your country has that implicit knowledge that it’s a day off. But these days have absolutely zero significance for the vast majority of people in Australia|Japan|Holland. Block it out so you don’t become a perpetrator of Grievance 1.

Grievance 3: The earth is round which means the sun doesn’t shine on all of it at once

Continuing the “we-don’t-all-live-where-you-do” theme, please, please, please remember that when you’re in prime meeting mode in the middle of the day, I might normally be in the middle of big night’s sleep. Sometimes meetings at inconvenient times are a necessary evil but there’s nothing worse than seeing meetings set up with an obvious imbalance of favouritism towards one country. Give a bit, take a bit, but do your best to avoid getting people up in the middle of the night. Business hours are cool, early mornings and evenings are sometimes required, just do your darndest to avoid that 10pm to 6am slot.

Grievance 4: Less than 24 hours’ notice for a meeting is almost always not cool

I know Bob from Marketing has got a tight deadline and Jill from Sales needs to urgently discuss those reports but seriously, how often is a meeting not important?! Giving someone short notice that they need to take a chunk out of their day they weren’t expecting has all sorts of flow-on effects. There’s nothing worse than driving|walking|bussing|training into the office, getting all your thoughts straight for the day ahead and planning everything you’re going to do only to find someone has dropped a last minute request to take a sizable chunk out of your day.

Grievance 5: Your meeting acceptance is your word, don’t break it

Once again, I get that we’re all busy and there’s a million reasons why unexpected things pop up but seriously, think through the consequences of bailing out of a commitment you’ve already made. Often there has been a lot of planning by numerous people to get the right parties engaged, schedules shuffled and material prepared. You’re almost certainly not conscious of the lengths someone may have gone to in order to tie everything together so don’t just assume – even if it’s a one-on-one meeting – that the organiser is not going to be inconvenienced. Absolute worst case, bail out as early as you can so they can make other plans.

Grievance 6. Get yourself organised and turn up on time

Sitting around waiting for participants to arrive is the fastest possible way to flush productivity down the drain. That ten minute delay multiplies out very quickly across all the participants and even when they do kick off without you, once you finally arrive it inevitably disrupts proceedings and often causes the organiser to go back and rehash information which has already been shared. You’re usually not going to be very popular when you do this (even if it’s not outwardly said), and rightly so.

If you absolutely, positively can’t keep your commitment and turn up on time, let people know you’re running behind so they can make a call on proceeding without you. If the traffic is crazy or the flight is late, announce it as early as is humanly possible. Seriously, you’ve got phone|SMS|email in your pocket, there’s rarely an excuse for not letting someone know what’s going on.

If you’re regularly involved in teleconferences, get yourself a phone you can mute. Trying to be a silent participant while your kids are playing up, there’s a meeting going on next door or you’re trying to pump out a few emails on the keyboard can be very annoying. Join the meeting, say g’day then go into mute until you actually need to make a contribution to proceedings.

Grievance 9: No, I don’t want to phone the other side of the world

Continuing the teleconference theme, if you’re using a conference service then the chances are they’ve got local dial-in numbers spread out around the world. Send these to people. There’s nothing worse (and often more embarrassing), than getting yourself all set up for a meeting and finding the only number starts with a “+” and everything after that looks kind of foreign so you end up running late trying to find alternative numbers rather than running up a scary phone bill.

Grievance 10: Don’t forget to remind me just before the meeting

This might sounds a little selfish, but setting an Outlook (or other scheduling client) reminder just before the meeting is absolutely essential. When I’ve got my head down engrossed in some serious business and really “in the zone”, time flies by and if my phone or PC doesn’t start beeping at me to remind me I need to be doing something else, chances are I’m going to overlook it. The thing is, Outlook will set a 15 minutes reminder by default – don’t turn this off!

I’ve done all these things and chances are, I’ll do them all again. I’m sorry. But I’m conscious of this behaviour and I always have an attack of the guilts when I screw it up. Fortunately that’s not very often and it’s usually followed by a profuse apology but I’m certainly not without blame.

However, if you’re a frequent perpetrator and you’re unconsciously incompetent in the field of basic meeting etiquette, then I GOT A LOT OF GRIEVANCES WITH YOU!