I have a love-hate relationship with ads, whether they be on my blog or anywhere else for that matter. I get that they're a necessity for many news outlets to keep providing the free information that we all want, but I also can't stand the way advertising has descended into the sleazy, risky, slow and all-round negative experience it so frequently is today.

I've had ads on this blog for years and they've been provided by Developer Media who specialise in serving technology-centric ads of relevance to my audience. Over the years I've seen a lot of ads for products ranging from cloud services to security appliances. Occasionally, I've also seen ads for things like consumer headphones because unsold ad space ends up being resold to plug more generic products. I was seeing headphones because I was Googling for headphones so yes, there's the whole tracking thing too. A while back, people on iOS were complaining of redirections to the App Store in an attempt to have them download Clash of Clans because occasionally ad networks do screwy things like that too.

Ad networks can do screwy things with your traffic because whilst you think you might just be looking at an image on a page, you're not. For example, this Azure ad was adorning my blog at the time of writing:

Now I don't have a problem with the contents of the ad, but here's how it's embedded in the page: 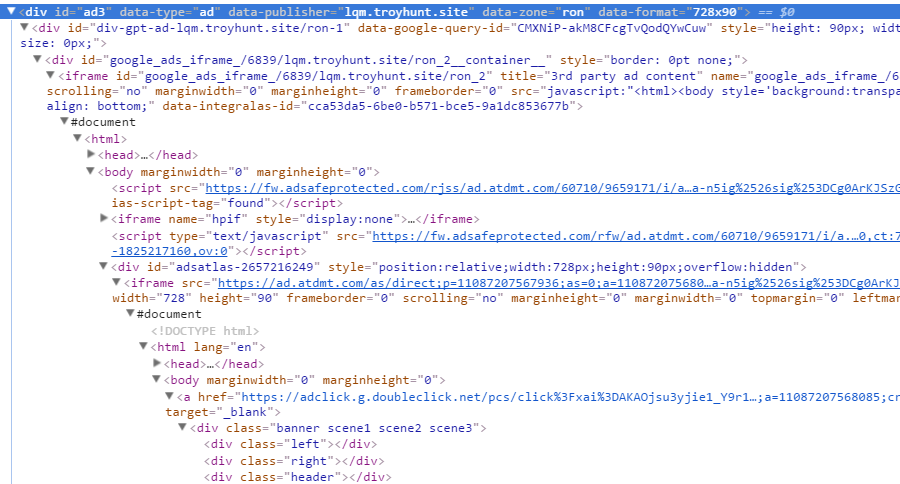 Only the first highlighted div is the code I actually added to my blog template. When the Azure ad loads into my blog, you're not downloading a hyper-linked image, rather you're downloading an iframe with scripts from adsafeprotected.com which then has another iframe with stuff from atdmt.com (I don't even know who they are) and it all gets rendered into the browser. Sometimes. Other times people run ad blockers (particularly an audience like mine) and they see nothing which I totally get. So we've got lots of extra stuff being loaded from places I don't control and many people block it outright anyway.

By now, many of you are probably thinking "has he really only just worked this out?!". No, but the problem is money: ads pay. A huge amount of time goes into writing my posts and a return on the effort is always welcome, particularly in my life as an independent where I have to carefully figure out how to prioritise my time. But whilst they pay, they also don't pay much and you need huge volumes of traffic to make much of an impact on cash flow. All of this together brings me to the point of the post: I'm offering sponsorship of this blog in place of the ads you see here at the time of writing.

It was Graham Cluley who got me thinking about this and his approach is as follows:

The sponsor is merely a row in the page banner. No iframes, no scripts, no trackers and no unknown third parties. Further to that, no ad blockers keeping it out of sight which is probably just fine by those running them because they're not being subjected to any of the nasty things I just mentioned anyway. I also love that Graham publishes a really clear sponsorship page which outlines everything nice and transparently. I had a good chat to Graham and I really like the way he's done this, especially as he's obviously been successful with it having already sold out space into 2017. Smart guy, Graham.

So to move things forward, I've now created a sponsorship page which gives a more formal definition of what I'm offering, but in short, it looks like this: 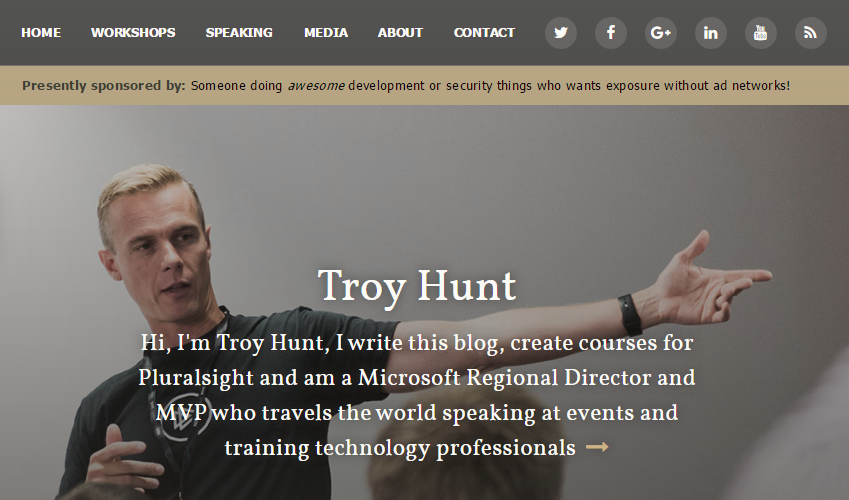 Or this on the smaller screens: 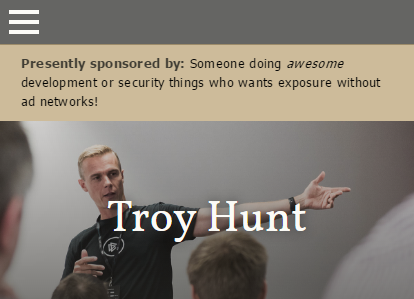 Plus it appears up top of the RSS feed which surfaces the message in both RSS readers and other consumers of the feed such as the email subscriptions via IFTTT: 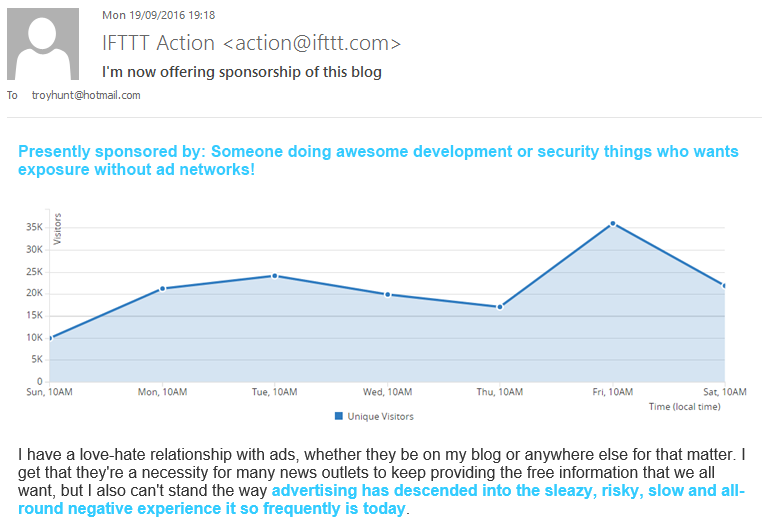 One of the other reasons I really like this approach is that it gives me a connection directly through to the organisation who wants the exposure. Traditional ads never did that; there was no talking to the companies and building relationships, it was just an "arm's length" thing where the ad suddenly appeared one day. Obviously this also allows me to be selective about who appears there and brands that align with my view of the world are great, but you won't be seeing CUJO promoted on this site any time soon.

Of course all this only make sense if brands get exposure out of it. I've shared stats on that sponsorship page, but I'll give you a quick overview here too as I often get asked about traffic. Here's my previous month according to CloudFlare:

I see about 1.2 page views per visitor so call it an even 1M impressions per month. Obviously traffic is always going to fluctuate and this period includes my Dropbox hack story getting a heap of international press, but then again there's always something hitting the headlines. Typically, traffic is in the 20k unique visitors each day range as the last week shows:

Predictably, that traffic is quite US-centric; here's the top 5 geo locations over the last year based on percentage of overall traffic:

India is next and then it tails off from there. I'm happy to provide more demographic breakdown for anyone who wants it too. I'm a bit wary of getting too infatuated with traffic numbers over small windows as it tends to go up and down (I still haven't come close to matching the post-Ashley Madison traffic), but the structure and distribution of the audience tends to remain pretty constant.

So that's it folks, that's the model I'd like to move towards. I'll kick that in as soon as the first sponsor arrives and hopefully I can replicate Graham's success and keep it free of those traditional ads. I'm still working out how to correctly price it and I'm sure that's something that will evolve over time depending on how the interest goes. Obviously I'd love support on this and it will really help me put more effort into blogging so if there's a company you think you should be seeing at the top of this page, give them a nudge. I'm available via my contact page for any enquiries and until then, here's a traditional ad (unless you block it, which I wouldn't blame you for):