There are many challenging aspects about being an Australian. For example, being terrorised by kangaroos:

Being terrorised by koalas:

Or my own unique challenge: not having a decent wifi signal whilst my jet ski is moored on the jetty out the back of the house. This makes every day, normal activities like connecting to the home NAS to watch movies via Plex whilst sitting on the docked ski difficult and clearly, something had to be done.

Ok, getting (a bit more) serious for a moment, a few months ago I wrote about how I finally fixed my dodgy wifi where I rebuilt my home network from the ground up with Ubiquiti products. I was sick of the problems I was having with crappy consumer grade gear and I wanted to do things properly, so I put in all the research, went and bought a couple of thousand Aussie dollars' worth of gear and did exactly what the blog title suggests. I thought it would be a useful blog post, but I never expected so many other people would then go out and rebuild their own networks in a similar fashion. The post really resonated and as I said in my 2016 retrospective, it was the surprise blog post of the year.

Clearly, this also made Ubiquiti happy. I wrote that piece with zero input or incentivisation from them and organic, genuine reviews like that without motive are extremely valuable. Anyway, to show their thanks they sent me over a box of their bits which whilst not organically acquired in the same way as the previous bits, are still well worth talking about. Now in all honesty, I didn't need any more bits, but if you're here reading this then you're probably a bit like me in that you're gonna find a way to do something cool with them anyway.

Amongst the bits they sent was this: 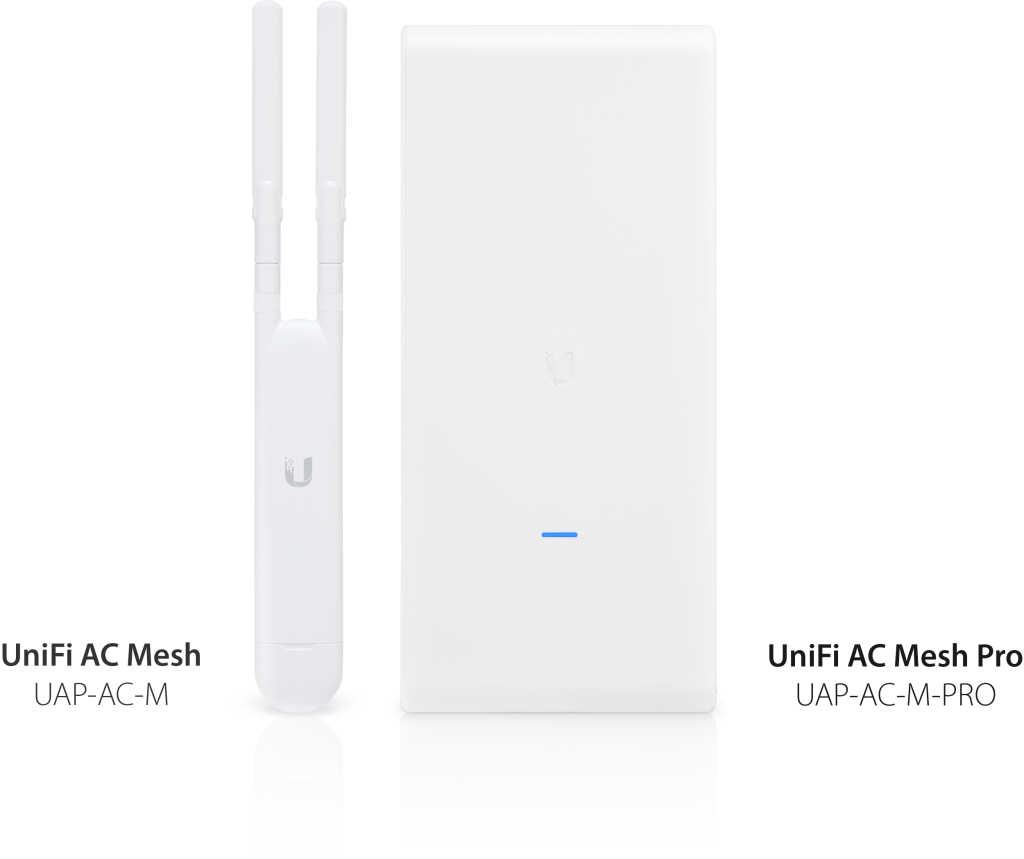 This is UniFi Mesh and it's designed to wirelessly extend your wifi range. The big unit on the right is a UAP-AC-M-PRO and the little one on the left is a UAP-AC-M. They're designed to run outdoors and give you a heap of range on your wifi: 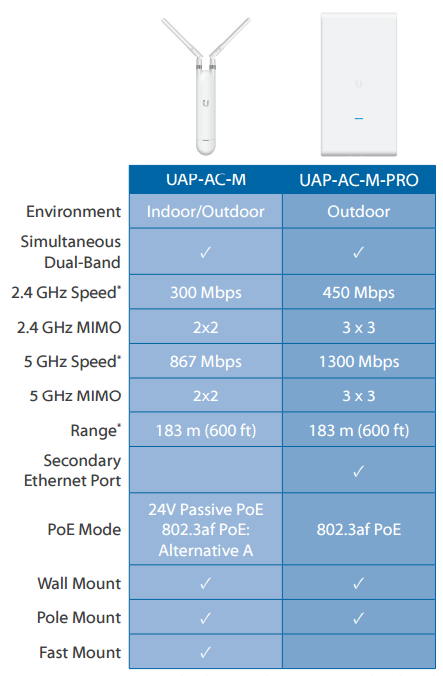 I wrote about "UniFi" in the original blog post and referred to their definition of it:

Buzz words aside, the big thing I find now having lived with the setup for a while is the central management and you'll see what that looks like in the images a little further on in this post. Getting back to how it relates to their mesh setup, the idea is that by joining a number of the devices up, you can get enough range to say, cover a street fair in a city plaza: 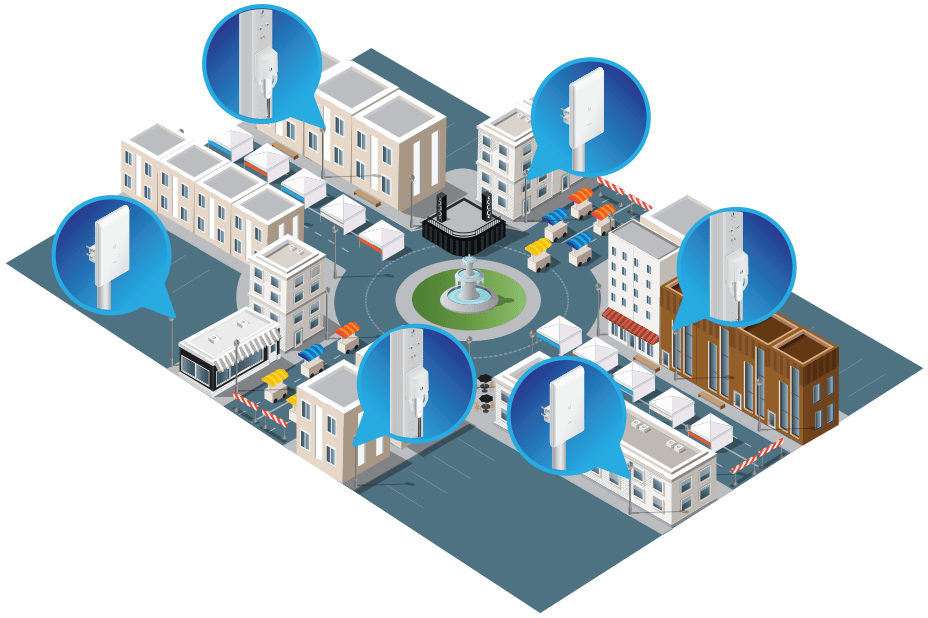 The whole "mesh" principle is that these devices can talk wirelessly with your UniFi network thus creating a "mesh" of coverage over a much larger area. Ubiquiti does a good job of explaining it in their post from only a few weeks back on Moving Beyond the Conventional Wireless Network with UniFi Mesh. Now, as it relates to actually getting some decent wifi on my jet ski, the path forward was clear: 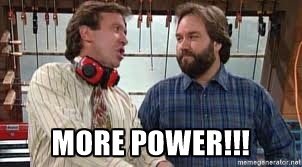 I started with the pro unit and found a good spot to mount it right above the BBQ: 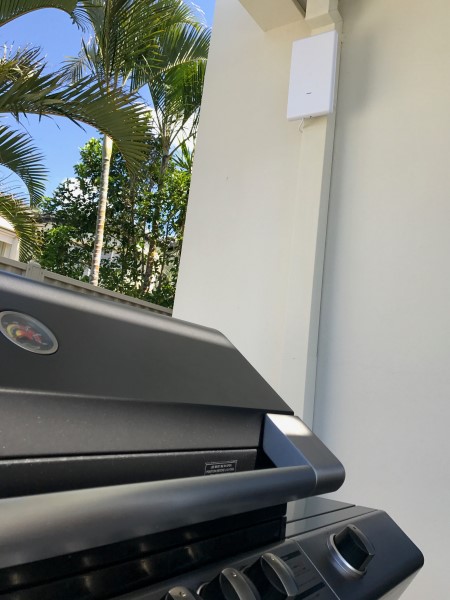 This is actually a pretty neat location because the coverage at the BBQ wasn't always great anyway. As I mentioned in the original post, the whole house is wired for ethernet but obviously, I'm at the mercy of where the jacks are and that meant suffering on throughput whilst cooking my sausages.

Both the UAP-AC-M devices take power over ethernet which is neat is you have a PoE enabled switch you can plug them directly into. But of course, being remote of the ethernet jacks, that wasn't going to work so I used the bundled PoE injectors which plug into the mains.

Once connected, I was able to "adopt" the device just like I did the access points in my earlier blog post. This is all wireless so the UAP-AC-M-PRO is talking to my existing AC-PRO access points over the air; the only cable is for power. I named it appropriately and subsequently saw it appear in my UniFi dashboard: 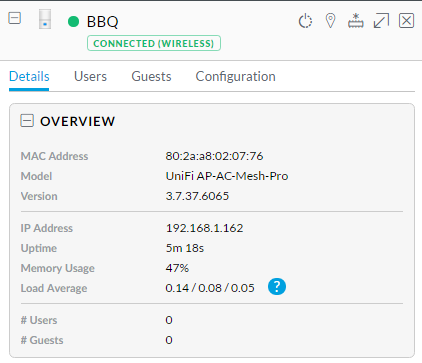 By drilling into the uplink section of the device, I could see it had decided to connect directly to the access point in the master bedroom which is geographically closest and obviously had the best signal strength: 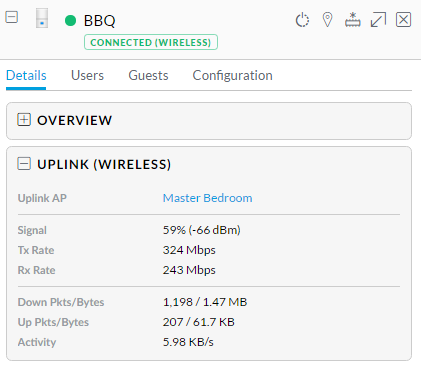 Cool, so the BBQ is talking to the bedroom, it's a brave new world we live in! But what about speed? I did a total of 3 benchmarks using my iPhone with the speedtest.net app: 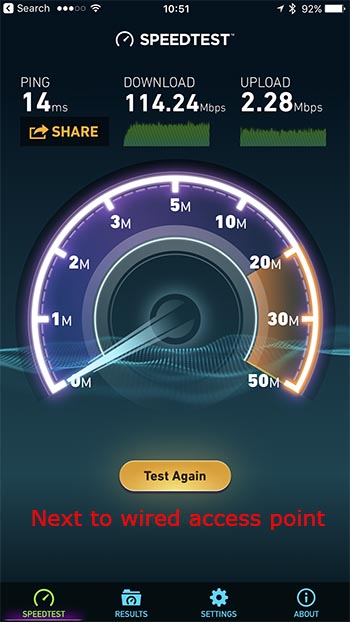 This was the benchmark so effectively as fast as I could get. It was the phone literally sitting next to an AP connected to ethernet directly back to the switch and internet connection. And yes, that up-speed is normal, welcome to Australia!

Next, I went out to the BBQ with the new access point turned off: 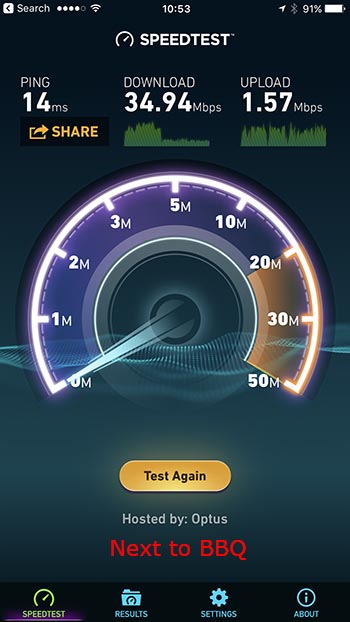 Now frankly, this isn't bad and were it not for the care package from Ubiquiti, I wouldn't be inclined to say that 36Mbps down is insufficient for cooking sausages. But it's still a 70% drop in speed and because I can, I've fixed it: 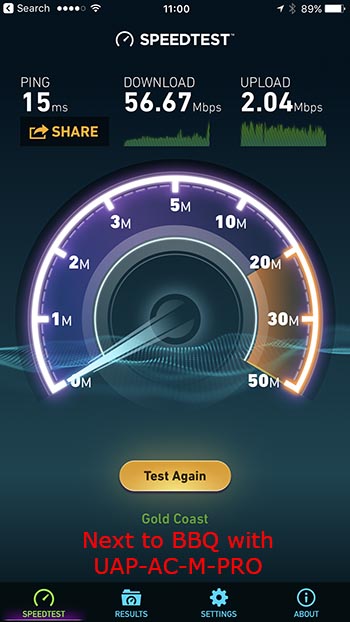 That's a very decent speed boost, a 62% jump in fact. The difference between the last two graphs would be far more dramatic as I moved further away because the UAP-AC-M-PRO has a broad line of sight and a long range whilst the AC-PRO inside is secreted away behind walls and doors and has a much smaller range (122m versus 183m). Obviously, the quality of the uplink is really going to matter here and had I been able to wire the UAP-AC-M-PRO directly via ethernet, we'd be looking at a fundamentally different result here.

Moving further outdoors, I mounted the UAP-AC-M (this is the little one, remember), down on the jetty in a convenient spot near where I moor the jet ski. Same deal as the big fella in terms of it being PoE so all I needed was power. Here's how it looks: 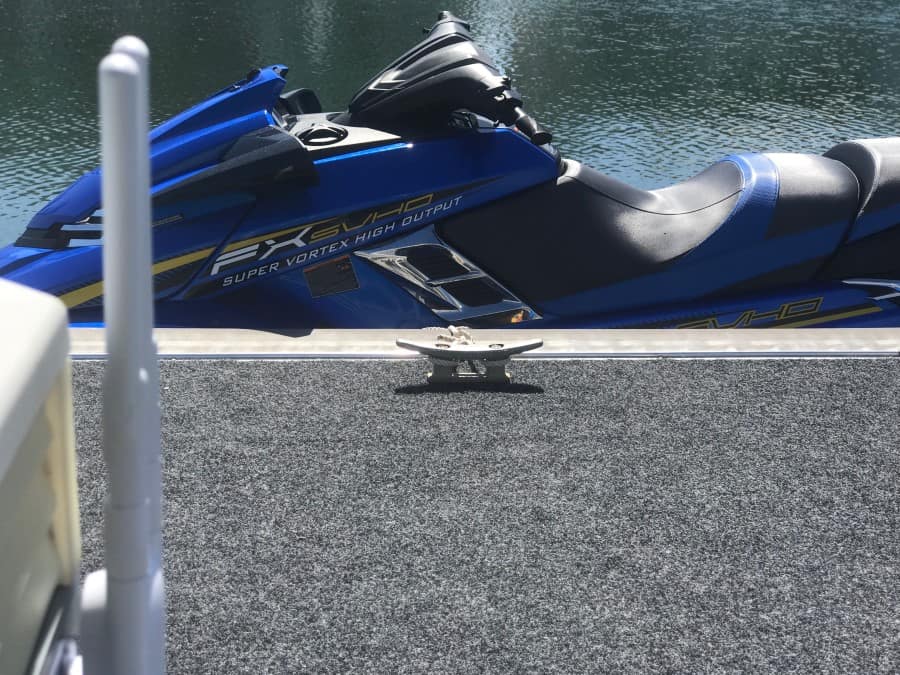 Same as all the other UniFi bits Ubiquiti ships, I jumped into the dashboard, adopted the new device and moments later it became an extended part of my network: 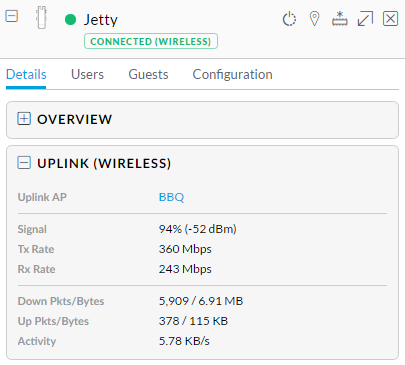 We can see here that it's uplinking to the BBQ which is just perfect because it has a good line of sight (UAP-AC-M-PRO circled): 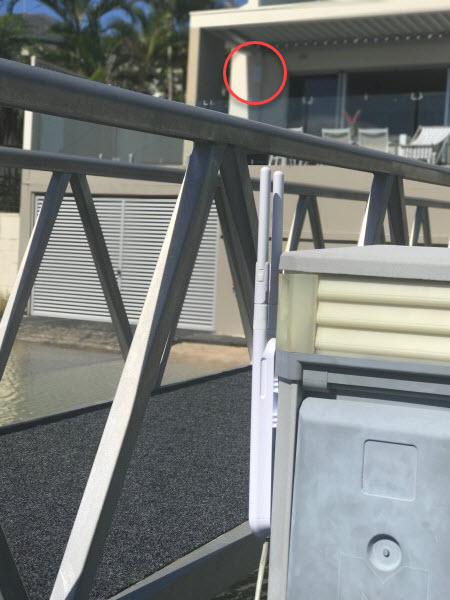 Or looking back at things from the other direction: 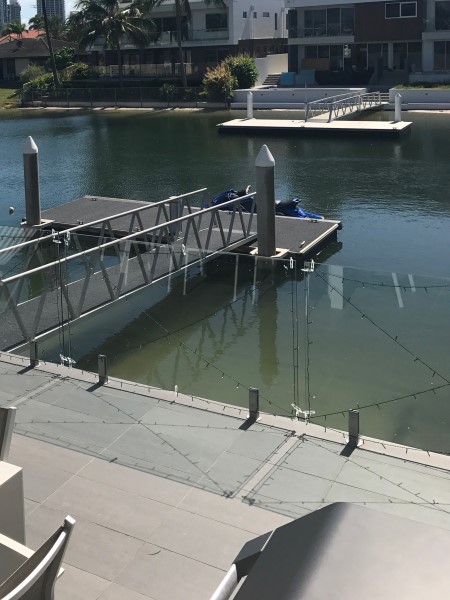 So, onto the speed test and I started by unplugging both the new mesh devices to test the "before state" on the jetty and got a pretty ordinary result: 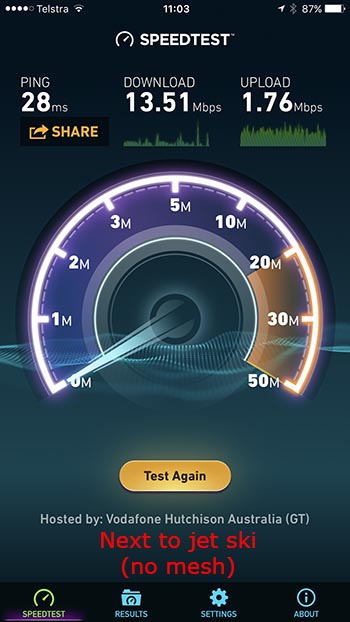 Power the new bits back up, run the test again and things turn around somewhat dramatically: 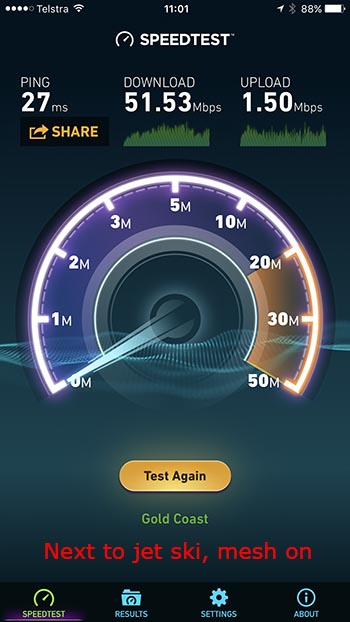 Great! That's nearly a four-fold jump in speed which is pretty significant. No wiring, just power and a few mins to join to the network (the physical mounting of the devices took me a lot longer). That's also within about 10% of the speed I got when directly connected to the BBQ the mesh uplink is only robbing a bit of the speed (although keep in mind that this test is always going to fluctuate speed wise). But in terms of linking everything up, it couldn't be easier!

On a more serious note though, this is the sort of thing that'd work great where distances are involved and running cables doesn't make sense. My parents have a shed dozens of meters away from the house so this would be a neat way of getting coverage there, for example. You've certainly always been able to do this with other gear too, but as I pointed out in the previous post, part of the joy of all this as that as the name suggestions, it's beautifully unified: 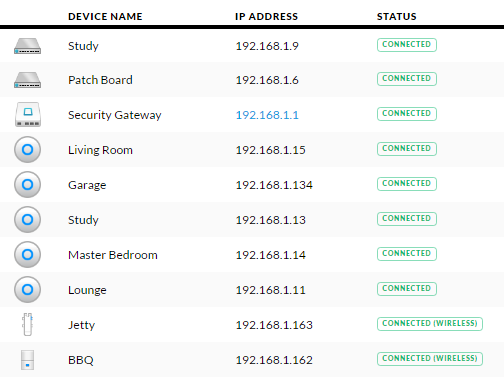 It's everything from a single snapshot of the devices to being able to upgrade them in a rolling fashion so as not to take everything offline at once. In fact, I'm writing this post a little while after actually setting everything up and I noticed an update was available so that's exactly what I'm now doing: 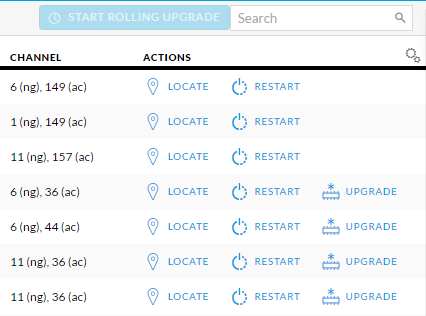 As I add more devices to the network, the mapping features starts to look pretty neat: 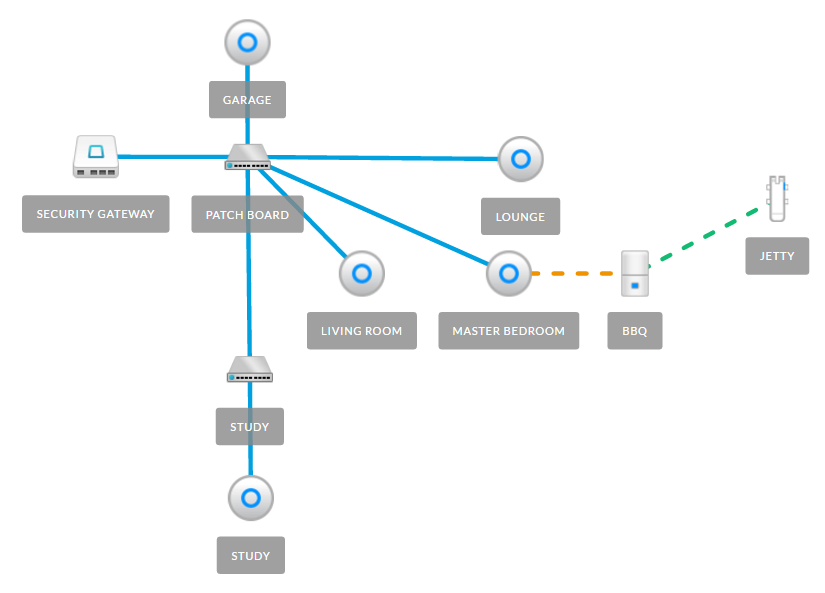 You'd normally have a floor plan of the house here too and if you're worried about dead spots, you can flick on the graphs that show coverage for both 2.4G and 5G spectrums (the latter shown here which has a smaller spread but higher throughput): 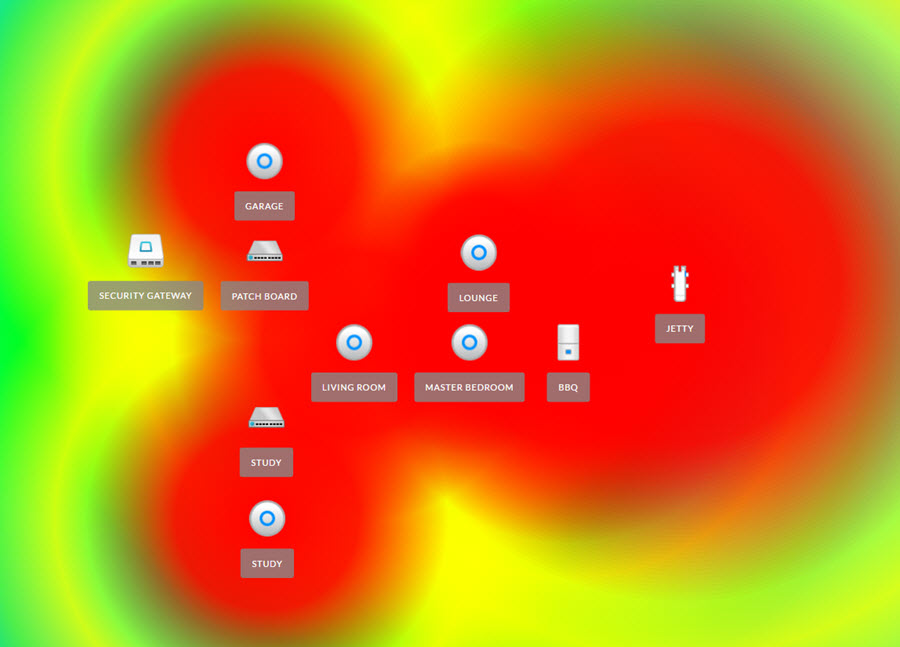 Or the map I really like that didn't hit beta until after my initial post, the topology map which includes all client devices and how they're connected throughout the house: 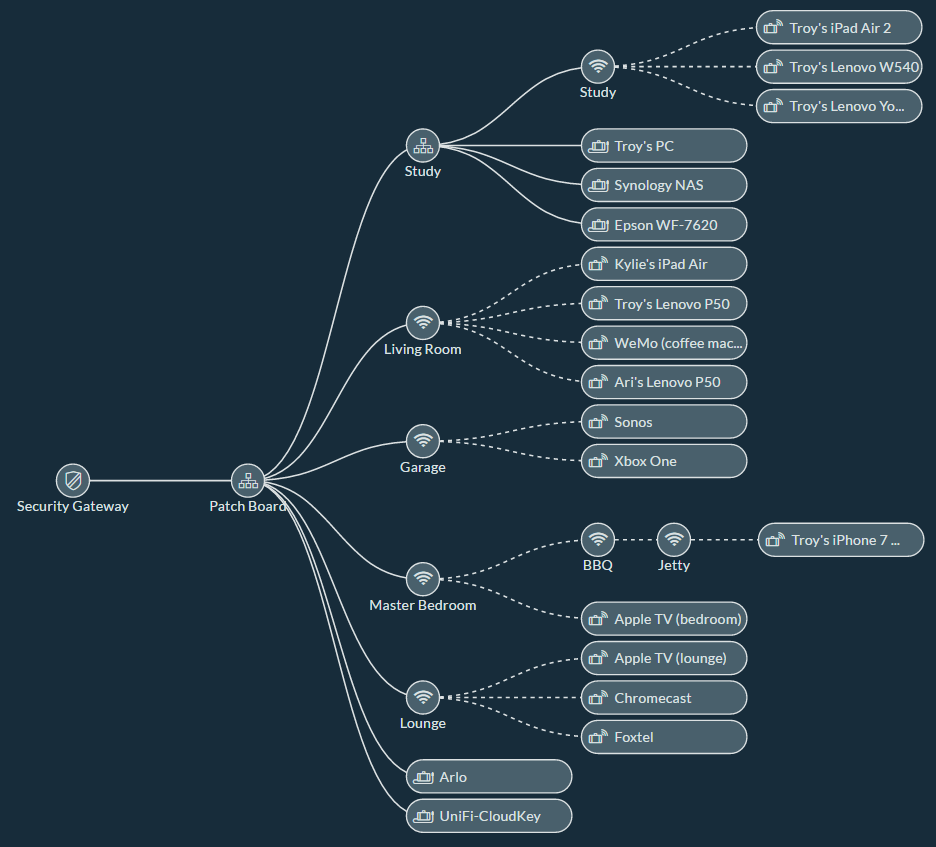 Poor connectivity whilst sitting on your jet ski is about the most first world of first world problems I can think of. I honestly don't need better connectivity there! But I was genuinely curious as to how the UniFi Mesh setup would work and it was pretty much precisely as expected. I like that it was simple enough just to power up the device and add it to the network with no further configuration, but at the same time I can sit here and pop up a terminal window to the BBQ AP is I so desire:

I've got another Ubiquiti project I'm working on at the moment which I think people building or renovating a house will find really interesting, I'll write that one up over the coming weeks and it will touch on some all new bits that I wish I had in my house. Stay tuned!

Edit: Also see Wiring a home network from the ground-up with Ubiquiti which is the new post I referred to in the last paragraph.