I don't mind ads on websites as a concept, that is I don't mind the idea of a message appearing somewhere that helps the producer of said content earn a crust. However, there are other things about ads that I do mind enormously and most of them are due to the ad networks themselves. I don't like the overhead of a whole other website being embedded into an iframe. I don't like the total irrelevancy of much of the ad content. It could be tailored to my browsing habits, but then I'm not overly fond of the tracking. Oh - and I definitely don't like being served either malware or really obtrusive behaviours such as ads viewed on iOS redirecting me to the app store in an attempt to have me download Clash of Clans. None of these things are fun and they're all directly attributable to the way networks run.

Back in September, I'd had enough and I introduced sponsorship of my blog. Now I don't care if you call this an ad or not, but what's fundamentally different is that it amounts to nothing more than a single line of text at the top of the site that I serve myself. For example, here's what viewers today are seeing: 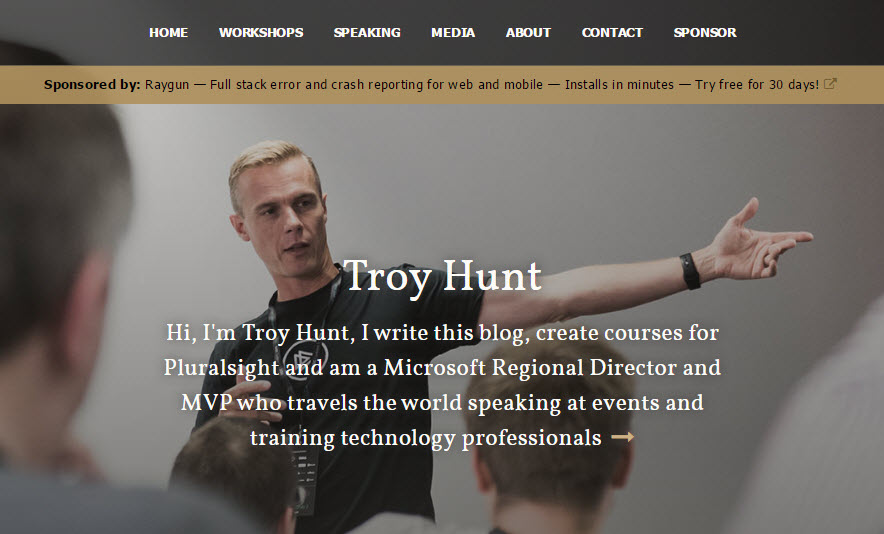 Raygun is a perfect example of the sort of sponsor I want on board too because I've written about them many times before and I'm honestly, independently endorsed in what they do. In fact, every sponsor I've had on board to date has done things that are entirely relevant to my audience which is a really nice way of doing targeting without all the invasive stuff that goes along with it. Partly that's because I curate them - I've rejected multiple potential sponsors because our views simply weren't aligned - yet even still, I've never had an un-sponsored week since I launched. Actually, all sponsor slots up until the beginning of April are now fully booked out, and that got me thinking.

When I launched the sponsorship model, I assumed I'd have plenty of weeks where there wasn't one. In my naivety at the time, this seemed like a reasonable assumption so I had a fallback position that would revert to the old ad model if the slot wasn't filled. It would also mean my sponsor bar would look like this:

But thinking about it lately and considering both how well the sponsorship was going and how much I dislike ad networks, I've decided to permanently kill all ad network code. HTML - gone. CSS - gone. JavaScript - gone. If I have an un-sponsored week then that last image above is all that will happen and that's absolutely fine. The sponsorship model has worked enormously well in every way and that includes financially, so I see no sensible reason why there should be any remaining ad network remnants whatsoever.

We need a better commercialisation model for content creators that doesn't suck like ad networks do. There has to be a happy middle ground somewhere between all the nasty things that (most) ad networks bring with them today and the other end of the extreme which is outright blocking of ads. And honestly, they've got issues too - I recently wrote about how ad blockers are part of the problem and whilst some people vehemently disagreed, I stand by that assessment.

What I'm trying to do with sponsors is what I strongly believe is the most responsible middle ground that keeps the greatest number of people happy, myself included. Thank you to everyone that's been supportive of this model and of course a big thanks to the sponsors as well. As of now, all ad network code has been permanently removed from this site!